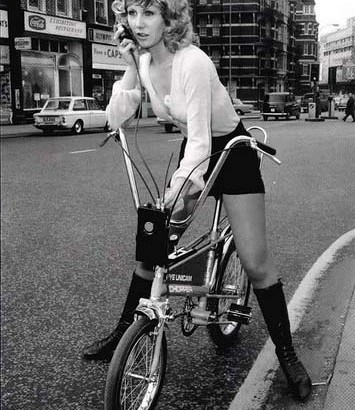 Pedaling Through the Past

Image by brizzle born and bred
Frank Bowden (1848- 1921) was the founder of the Raleigh Cycle Co and the inventor of the Bowden Cable.

1879 He met and married Amelia Frances (d. 1937), daughter of Colonel Alexander Houston, one of the pioneers of California State.

When Bowden was 24 years old he made a fortune in the stock market. When he returned from Hong Kong he was seriously ill. His doctor gave him 6 months to live. On his doctor’s advice, Bowden took up cycling. After recovering from the illness he bought the company where he originally purchased his bicycle.

Sir Frank Bowden purchased a bike from a small firm of cycle makers on Raleigh Street in Nottingham. Within a short period Sir Frank Bowden had recovered and became increasingly interested in cycling. Impressed with his bike, Sir Frank Bowden bought an interest in the company who made it which at the time was producing three bikes a week. Production rose, and three years later Bowden needed a bigger workshop, which he found in a four-storey building in Russell Street. He changed the company’s name to Raleigh Cycles to commemorate the original address.

In December 1888 The Raleigh Cycle Company was founded as a limited liability private company. It grew rapidly and within a few years was a large public company capitalised at £100,000 equivalent to about £5m today.

By 1896 it was the largest bicycle manufacturer in the world.

He died of heart failure at his home, Bestwood Lodge, Bestwood Park, Arnold, Nottinghamshire, on 25 April 1921.

His only son, Harold Bowden, succeeded to the baronetcy and assumed control of the company.

It is one of the oldest bicycle companies in the world. From 1929 to 1935 Raleigh also produced motorcycles and three-wheel cars, leading to the formation of the Reliant Company.

In 1939 Raleigh opened a bicycle factory at 6 Hanover Quay, Dublin, Ireland and commenced bicycle production there. The Raleigh (Ireland) business expanded and moved to 8-11 Hanover Quay, Dublin in 1943. The plant produced complete bicycles and Sturmey-Archer hubs, and remained in production until 1976, when the factory burned down. Models produced there latterly were the Chopper and Triumph 20. The head badges changed in the late 1960s, possibly after the passing of the Trade Descriptions Act in the UK. Dublin-made machines no longer had “Made in Nottingham” on the Heron or Triumph head badge, the panel being left blank instead.

The Raleigh Chopper was launched in Canada June 1969 as a children’s bicycle. It went on sale in the UK in 1970 and sold well, and was a key factor in reviving the company’s fortunes.

The Chopper featured a 3-speed Sturmey-Archer gear hub, selected using a frame-mounted car-like gear lever — one of its “cool” features. Other differences were the unusual frame, long padded seat with backrest, sprung suspension at the back, high-rise handlebars, and differently sized front (16″) and rear (20″) wheels.

Tyres were wider than usual for the time, with a chunky tread on the rear wheel, featuring red highlights on the sidewall. The price was from approximately £32 for a standard Chopper to £55 for the deluxe. Two smaller versions, the Chipper and Tomahawk, also sold well.

The Mk 2 Chopper was an improved version from 1972. It had the option of five-speed derailleur gears, but kept the gear lever. The Mk 2 also moved the rear wheel further back, to help prevent the bike tipping up. The Chopper remained in production until 1982, when the rising popularity of the BMX bicycle caused sales to drop off. However, the Chopper almost single-handedly rescued Raleigh, selling millions worldwide.