The knowledge, tools, and seeds we’ll want if disaster strikes

Most of us are ready for small-scale disasters. We’ve done fire drills and filled out the “emergency contact” field on forms. But few of us have emergency plans for after we have to flee an asteroid impact that lights an entire continent on fire, or to cope with the complete social breakdown that would follow in the wake of a global radiation disaster or a deadly pandemic. We’re haunted by the idea of these mega-catastrophes, because they’re not implausible. It’s just that preparing for them isn’t as simple as building a bomb shelter.

When you’re looking down the barrel of a civilization-erasing event, you have to plan for a world where humanity has lost everything. Canned goods might be nice, but you’d better have brought along a can opener—or know how to make one. In the event that life as we know it is truly upended, the survivors will have to rebuild our civilization. Given everything humanity has learned over the past hundred thousand years, what information should we leave them? And how do we store it so they can actually make use of it?

In recent years, these questions have jumped from the pages of science fiction novels and onto the research agendas of a range of thinkers, from physicists to philosophers to agricultural engineers to librarians. As humans become increasingly aware of our impact on the planet and the gravity of the disasters that have struck Earth in the past, it’s starting to seem wise to consider how we would reboot in the event of a system failure. Our best shot at clawing our way out of a new dark age may be to start curating and preserving caches of the most useful and important information, tools, and biological samples from today’s world. And the things we’re trying to save say as much about what we value in the world we’ve already built as they do about our hopes for the future.

“The apocalypse is just a starting point,” said Lewis Dartnell, an astrophysicist and author of a new book on the subject, “The Knowledge: How to Rebuild Our World from Scratch.” “It is going to be a brutal and hard life where everything will be difficult. The question is how to take an optimal route back, without stumbling around in the dark.”

If humanity is decimated by a pandemic this year, Dartnell told me by phone from his office at the University of Leicester, his goal is for “The Knowledge” to help us do things like loot our abandoned cities for metals, or find sources of energy on a planet whose most accessible fuels have long ago been mined.

Part of the trick, he notes, is that our present-day lifestyle depends on a huge amount of information that we ourselves do not know. “The most visible technology we use daily is just the tip of a vast iceberg,” he writes, and “represents the heritage of a long history of advances and developments.” If we try to rebuild based on the giant trove of information in a library or Wikipedia, he says, it will actually be too overwhelming. What we need to leave the survivors is a guide to producing the basics—food, clothing, tools, energy, medicine, ways to communicate. And in rebuilding, we will also want to skip some of what, in the present day, have turned out to be dead ends. Fossil fuels, for example, were fun while they lasted, but now that they’re mostly depleted, it hardly makes sense for a new civilization to try to duplicate that effort. 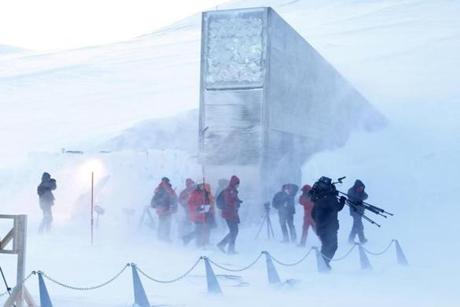 Journalists near the entrance of the Svalbard Global Seed Vault in Norway.

Above all, for Dartnell, the most important piece of knowledge for humans to preserve is the scientific method itself, which he calls the “key to unlocking all other knowledge.” That said, he does think some bits of scientific information are more important than others, such as the germ theory of disease. “Infectious disease is something that you catch off each other, and it’s spread by things that are invisibly small and make you ill,” he said. “That’s a piece of practical information that could make a huge difference.”

There’s another place such practical information is being collected: in repositories intended to spread access to technological know-how right now. Since 2000, a Scottish software engineer named Alex Weir has been compiling agricultural and health information into a resource he calls cd3wd. His goal is to help people in developing nations bootstrap their economies, but observers have also pointed out that it would be an extremely useful library for future humans who wanted a shot at healthy food, clean water, and basic medicine. Similarly, physicist Marcin Jakubowski founded the Open Source Ecology group almost a decade ago to create publicly available blueprints for what he believes are “the 50 most important machines that allow the modern world to exist.” These include everything from ovens to 3D printers, and together they make up what he and his collaborators call the Global Village Construction Set. It’s not hard to see them as seeds that could grow into a new modern world.

Some things that humanity needs are dependent on a more literal kind of seed—the kind that contains biological information that can’t be re-created from a blueprint. Famine is likely to follow in the wake of mega-calamity, especially because so many farms now use the same crop species, which have the same vulnerabilities to disease, drought, and temperature changes. With this in mind, Norway’s Ministry of Agriculture and Food established the Svalbard Global Seed Vault roughly a decade ago on an island off the nation’s coast. There, a huge diversity of seeds is preserved in a series of naturally cool, dry caves. The Svalbard Global Seed Vault, which works closely with the United Nations, states on its website that its goal is “preserving the world’s biodiversity…thereby ensuring food for the world’s population for the foreseeable future.” Its stores are defense against “natural disasters, war or the lack of management or finance.” These seeds, in other words, could carry us through both environmental destruction and social collapse.

You don’t need the official status of the UN or the government of Norway, of course, to think ahead about what you might want to survive. Over the past decade, an active community of “preppers” has arisen on multiple continents—in essence, a whole grass-roots community of people trying to guess what they would need in the event of “the end of the world as we know it.” For the most part, preppers are more concerned with interruptions in the supply chain than with trying to start over from scratch, so their preparations largely involve stocking up on food, survival gear, and weapons. But they are also interested in the information that will be useful in a disaster; they are fond of military survival manuals like the freely available FM 21-76 US Army Survival Manual, and use online forums to swap information about how to make your own butter or fuel.

When I talked to Tom Martin, a founder and vice president of the American Preppers Network online community, he emphasized that a big part of preparing for mega-disaster is storage. You need “a lot of cabinets,” he said with a slight laugh. Indeed, the quest for the right kind of cabinets was one of the hardest problems for the Svalbard Global Seed Vault, whose organizers eventually settled on dry caves that could resist temperature changes and radioactive bombardment. That might be a solution for one centrally located trove of seeds, but somewhat different storage questions arise when your goal is to make a cache of blueprints for machines, or information about the germ theory of disease, broadly available to survivors wherever they are.

Perhaps more than any other group, librarians have pondered the question of how to preserve information in the face of total destruction. In disaster-prone Australia, where the State Library of Victoria in Melbourne has emergency plans in place for everything from floods to bush fires, metadata and cataloging librarian Afsana Khan can sum up their preservation plans with one word: redundancy. Will the survivors of the future still have access to the Internet, or are they better off having guides to knowledge available on paper, or in some other form? Who knows. The answer is to pursue all those kinds of media storage at once—to preserve the information in paper and in digital form, as well as on microfiche.

Megan Prelinger, founder of the open- source Prelinger Library in San Francisco, echoes Khan’s sentiment. Her library was founded on the principle that it’s crucial to maintain both online and paper versions of the collection, and to put it into as many hands as possible. At the Prelinger Library, patrons are encouraged to make their own digital copies of what they find. The more people who have a given piece of information, the more likely it is to make it through a global catastrophe.

Storage aside, the question of how to reboot civilization makes us consider something unusual: what our most valuable accomplishments as a society really are. For some, this means stockpiling what could turn out to be the very last vestiges of mass production: canned goods, jugs of fossil fuels, all-terrain vehicles. For others, though, it means wanting to be sure survivors know about the scientific insights that brought us those commodities in the first place. People may need food and shelter most of all, but it’s appealing to think that handing them a few key precepts of our culture could mean the difference between a hardscrabble, neolithic life and a much better one.

Indeed, there’s a utopian strand to apocalypse guides. Armed with the best information from today’s world, perhaps we could build something better in the rubble that remains. Maybe, if we jettisoned all that baggage from a history of war-making and industrialization, we’d actually be left with a more enlightened and sustainable society.

For Dartnell, that optimism is implicit in imagining how we might rebuild. “‘The Knowledge’ isn’t really about the apocalypse,” he acknowledges. “It’s about how our world was built, and how you could do it over, with hindsight.” His plans may anticipate the destruction of our world, but embedded in them is the hope that there might be a better way to live in the pre-apocalyptic world we inhabit right now.

Annalee Newitz is the editor-in-chief of io9.com and the author of “Scatter, Adapt, and Remember: How Humans Will Survive A Mass Extinction,” which has just been published in paperback.