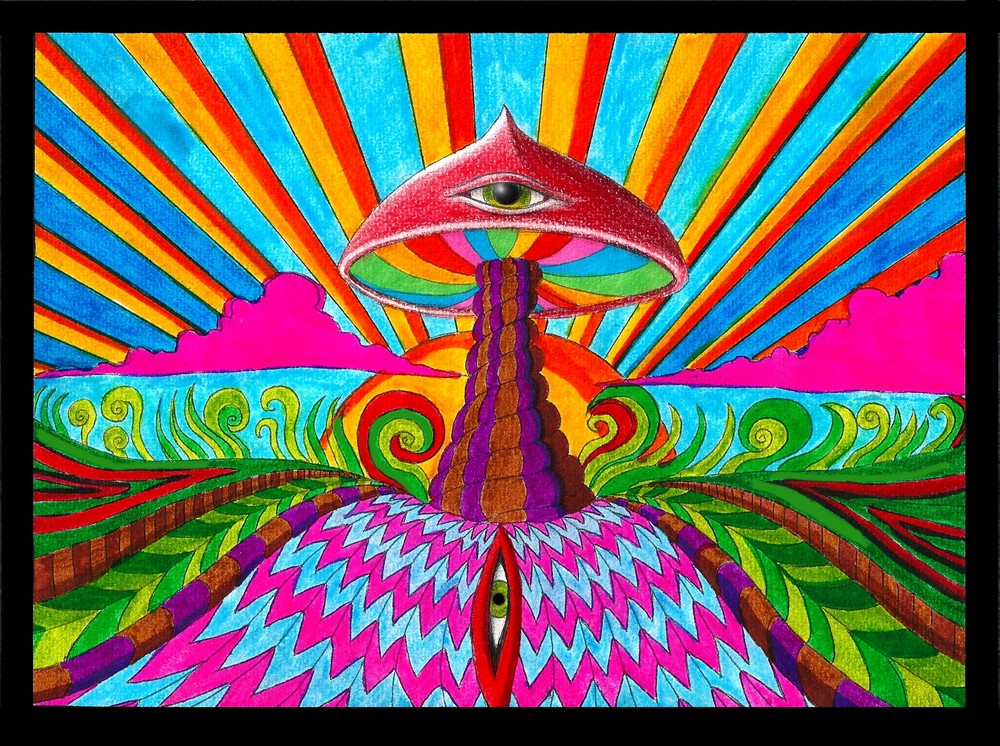 When I think about psychedelics, I find it handy to think about their idea-context. Of course ideas about psychedelics exist in any number of contexts, but one I find particularly helpful is the idea I call “neurosingularlity,” particularly the “Neurosingularity Project.”  The Neurosingularity Project is the discovery, construction, and development of useful abilities in all mindbody states, both natural and synthetic. As the name immediately suggests, it derives from Ray Kurzweil’s adaptation of the scientific word singularity. In his use, the singularity names a hypothetical future emergence of greater-than-human super intelligence through technological means, and he adopted singularity for the title of his 2005 book, The Singularity Is Near: When Humans Transcend Biology. He posits a time not long from now when computers will surpass human thinking thanks to nanotechnology, genetics, artificial intelligence, and similar technological breakthroughs.

But as his subtitle suggests, Kurzweil assumes that our brains and their biological information processing skills are static and will remain static while computers and electronic information processing surpass our poor outdated brains. The technologies Kurzweil identifies as promoting the singularity, also have their implications for the human brain and mind. Neurosingularity posits a time when future human brains (and minds) will surpass ours of today. This gives us two parallel and mutually supporting singularities, Kurzweil’s computer-based singularity and Neurosingularity’s mindbody-based singularity.This essay looks at a number of questions and opportunities that result. Rather than just enhancing current human thinking skills, is the neurosingularity also likely to increase the kinds and number of our brain-based information systems? Can we build: 1) better brains and install a greater variety of biological information processing programs (apps) in them? 2) More mindbody states? 3) More apps for the mind? Will some of them enhance current cognitive routines, while others create entirely new cognitive algorithms?  What sources of ideas flow into the idea of neurosingularity?  How might psychedelics contribute?

To begin answering these questions,

These discussions are by no means complete, but point to tantalizing fuller discussions.

The history of idea-flows into the theory of neurosingularity clearly stretch back at least as far as William James’s 1902 insight,  “ …there lie potential forms of consciousness entirely different [from normal waking consciousness] … definite types of mentality which probably somewhere have their field of application and adaptation,”  (1958, 298). Today scientific insights into the nervous system are being published almost daily. Multistate Theory helps organize our thinking about the Neurosingularity Project.

Among current tributaries to the Neurosingularity Project are: 1) multistate theory, 2) transhumanisn, 3) psychedelics, and 4) the human potential movement.

According to multistate theory (Roberts 2013), a significant and undervalued human trait is our ability to produce and use a large number of mindbody states. (Sometimes these are confusingly called “states of consciousness”). Multistates theory’s first point: There is a vast and unknown number of mindbody states, each with its respective kinds of cognitive and non-cognitive abilities.

Second, we achieve these mindbody states by installing a variety of psychotechnologies in our minds—mindapps—methods of producing mindbody states. Mindapps include martial arts breathing routines, neurofeedback, transcranial brain stimulation, hypnosis, meditation, among many others. Thanks to a burgeoning catalog of psychotechnologies, thinkers are no longer trapped into using only their ordinary default state and its siblings, sleeping and dreaming.

Psychotechnological mindapps can help fulfill the transhumanist goals of extropy:

The extropic goals can all be assisted by the broad range of psychotechnologies including psychedelics. Transhumanism’s sparse knowledge of psychedelics is one of the great puzzlements about this movement. I guess it is due to the Singlestate Fallacy—the error of assuming that all worthwhile thinking takes place only in our default, ordinary mindbody state (Roberts, 2013, 123-124).

It is primarily due to psychedelics that I became interested in mindbody states, formulated multistate theory, and invented the ideas of mindapps of neurosingularity. The Psychedelic Future of the Mind (Roberts 2013) focuses on psychedelics as one practical psychotechnology with a wide range of psychotherapeutic applications and diversified intellectual innovations. In addition to psychedelics’ more popular influences on, say music and the visual arts, psychedelic psychotechnologies contributed to the birth of computer revolution (Markoff 2005), produced solutions to scientific and professional problems during experimental research (Fadiman 2011). Enhancing Mullis’s visualization skills ((Horizon 1997), they provided the insights for his Nobel Prize in biology for inventing the PCR method (Mullis 1998) and may quite possibly helped Crick visualize the DNA molecule (Rees 2004, Fadiman 2011, 4). Psychedelics are enriching the humanities (Roberts, this book), and strengthened cognitive studies (Roberts 2013), mapped the human mind in greater detail and provided access to it in greater detail (Grof 1975/2009). Currently psychedelics are advancing research in mental health (Winkelman and Roberts 2007), reforming religion (Roberts 2012, Ellens 2014), and informing philosophy including the philosophy (Lemmens et al, 2015).

Current psilocybin research from the Johns Hopkins Medical School’s Behavioral Pharmacology Research Unit is collected on the website of the Council on Spiritual Practices (www.csp.org/psilocybin).  Published in top-ranked journals, it epitomizes the high scientific standards of current psychedelic research. The Multidisciplinary Association for Psychedelic Studies and its Bulletin cover a wider range of psychotherapeutic and adjacent topics (www.maps.org).  The Erowid site extends the coverage to practically all psychoactive drugs (www.erowid.org).

Who will follow these leads? And who will access the forms of intelligence that reside in psychedelic and other mindbody states? It remains to be seen.

When we compare extropy with a description of the Human Potential Movement, it’s clear that they share remarkably similar optimistic goals for humanity with HPM being a precursor of transhumanism:

The Human Potential Movement (HPM) arose out of the milieu of the 1960s and formed around the concept of cultivating extraordinary potential that its advocates believed to lie largely untapped in all people. The movement took as its premise the belief that through the development of “human potential”, humans can experience an exceptional quality of life filled with happiness, creativity, and fulfillment. As a corollary, those who begin to unleash this assumed potential often find themselves directing their actions within society towards assisting others to release their potential. Adherents believe that the net effect of individuals cultivating their potential will bring about positive social change at large. (Human Potential Movement, 2014).

Many people in the human potential movement took inspiration from AbrahamMaslow, “This is then a chapter in the ‘positive psychology’ or ‘ortho-psychology,’ of the future in that it deals with fully functioning and healthy human beings, and not alone with normally sick ones” (1962, 69). With its emphasis on, “the positive, adaptive, creative, and emotionally fulfilling aspects of human behavior” (Compton & Hoffman 2013, 1), the Twenty-first Century’s positive psychology carries on the goals of Twentieth Century’s human potential movement.

Why have the transhumanist and human potential boats passed like ships in the night? Transhumanist memes come primarily from the physical, biological, and computer sciences, while the human potential’s tend to ignore the physical and computer sciences, overlap somewhat in the biological sciences but also have roots in the social sciences and humanities. Transhumanism almost neglects the latter two. Historically, this concept gap is at least partially due to the bad reputation that psychedelics had in the late Twentieth Century.

In my view, this shows up via a series of conferences sponsored by the Menninger Foundation and Clinic. Once a year in the 1970s, Menninger and the Transpersonal Institute co-sponsored a small invitation-only conference at an isolated church camp near Council Grove, Kansas (Fadiman 1969, 1970). Officially “The Conference on Voluntary Control of Internal States,” it was known familiarly as “Council Grove.” The conference intentionally published no proceedings, and the press was barred.

An official reason for this was that the meetings provided a safe venue for the first presentations of “raw” ideas before they were sufficiently matured to be presented at professional meetings or in publications. These tryout sessions allowed researchers to stretch their speculations and receive professional feedback in order to refine their ideas. Cutting edge topics included biofeedback, meditation, Native American and Eastern psychologies, alternative medicine, and other topics that were considered fringy at the time and which one didn’t discuss at serious scientific gatherings. Among the topics were psychedelics. My guess is that another handy reason for the scanty reports from Council Grove was that the organizers and participants needed a free agora of ideas away from the scurrilous ire of the press, politicians, and professional watchdogs.

In the Twenty-first Century with similar goals and outlooks on life, transpersonalists and transhumanists are well-suited as colleagues, notably in psychedelics. With a Lancet article titled “Research on Psychedelics Moves into the Mainstream” (Morris 2008), Scientific American’s “Hallucinogens as Medicine” (Griffiths & Grob 2010) and with a popular text in positive psychology now including psychedelics in its current edition (Compton and Hoffman 2012), transhumanists and other forward-looking scholars who fail to examine psychedelic leads are simply missing the boat.

Multistate theory, psychedelics, transhumanism, transpersonal psychology, and the human potential movement can all contribute to their mutual fulfillment and to the Neurosingularity Project. I hope “optimal-functioning” groups who I’ve omitted won’t feel slighted. I readily admit that this section is a sample, not a full catalog.

A Wider View of Our Minds

Although The Psychedelic Future of the Mind focuses on the psychedelic family of psychotechnologies (Roberts 2013), a complete Neurosingularlity Project expands the perspective to explore all known mindapps for moving toward superior, multistate brains and eagerly anticipates other psychotechnologies yet to be discovered and invented. In this context, the word brains, of course, is too restrictive, but it will serve as a shorthand for our whole nervous and hormonal systems, as well as other aspects of our bodies.

Unfortunately most people investigate only one or another psychotechnology and do not see their specialized work or that of others who specialize in other psychotechnologies as integrated into one larger model of our minds. However, multistate theory and Neurosingularity Project will help them recognize that all mindbody tributaries flow into a much grander river. With human existence going from the physical sciences through chemistry, biology, psychology, the social sciences, cognitive studies, the humanities, and philosophy (Lemmens et al 2015) a complete view of humanity has to recognize that inputs at all these levels interact with the others. Each discipline and selective intellectual group contributes its favorites; a full understanding of what it means to be a human and our possible human futures requires the full range of inputs.

As this article speculates, future developments may result in both more efficient current brains and redesigned ones, possibly even ones with new neurotransmitters, new receptor sites, and more refined structures. Below we’ll sample some science-based leads, wonder about their mindbody futures, and speculate about where their progress might lead us.