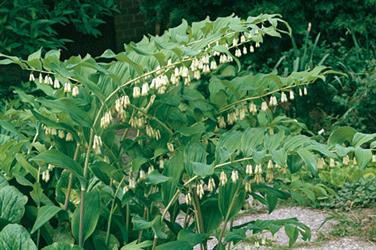 Solomon’s seal is a lovely feature plant for the woodland garden and is commonly found in cottage garden schemes. Sadly, in recent years it has been ravaged by sawfly, which can decimate its leaves in days. But with careful control this shade-loving plant can be grown to provide a graceful, arching shape in borders and delicate creamy-green flowers that dangle distinctively from the stems above.

The species we know as Solomon’s seal can be Polygonatum multiflorum, P. biflorum, P. odoratum or P. × hybridum Award of Garden Merit (AGM) — the most commonly grown. These are all quite similar, all around 60cm to 1m in height, with precisely paired pale-green, oval leaves along generally arching stems. P. multiflorum is probably the shortest, with more upright stems and leaves closer together, and P. biflorum probably the tallest.

There is quite a variety of forms within the genus, with around 50 species of Polygonatum found across Asia, Europe and North America. The familiar ones are like the species described above, with arching stems, opposite pairs of leaves and clusters of tubular or bell-shaped white flowers with green tips, hanging along the lower sides of stems in late spring. Flowers are usually followed by berry-like red or black fruits and the leaves turn yellow in autumn.

Then there are some much smaller plants, really dwarf alpines, and some types with strange needle-like foliage or pink flowers instead of the typically creamy-green. For example, P. graminifolium reaches a maximum height of 15cm, has grass-like leaves and small, pink, scented flowers — very different to the norm, as is P. hookeri, which produces pink flowers at ground level so that they resemble cherry blossoms that have fallen on the ground.

These kind of Polygonatum suit the rock garden more than the mixed or woodland border. The woodland species such as P. × hybridum AGM can be grown in a shady spot but also work in more open, sunny positions as long as their roots are cool. The best soil is one that is humus-rich and moist but still well-drained.

As mentioned, sawfly is now a widespread pest that can ravage Polygonatum plants, stripping the leaves and leaving them just tattered ghosts of their former selves within days. Early sprays with systemic insecticide at the first signs of infestation is the main control. Fail to do this and there will not be much left after a few days.

Plant the woodland types with other delicate shade-tolerant plants such as corydalis or dicentra or above low ground cover such as ajuga and tiarella from which the thin, arching stems of Polygonatum can emerge.
What the specialists say

Stella Rankin, owner, Kevock Garden Plants, Midlothian
“Polygonatum are very useful and interesting plants. They are easy to grow — just stand back and let them get on with it. You need to add grit for the alpine forms and leaf mould for the larger woodland forms.

“We like the more unusual ones best. There are alpine species such as hookeri, which flowers at ground level, the petals looking like cherry blossom on the ground, and then the leaves follow. It is great in a scree bed or trough. There are other dwarf forms such as graminifolium. It’s good in a rock garden.

“A rare and hard to find form is P. orientale, which flowers at about 30cm. We have some unnamed species that we have collected in the Himalayas. They are low-growing and we are waiting with interest to see how they perform.”

David Ward, nursery manager, The Beth Chatto Gardens, Essex
“Polygonatum is a very useful genus, especially for dry shade. It provides a lovely contrasting form against other woodland plants that tend to be lower growing. Generally upright to around 3-4ft tall, it emerges from those other plants.

“Straight P. × hybridum grows strongly. I like ‘Betberg’, which has purple-flushed foliage, but it’s hard to get hold of. I prefer P. odoratum var. pluriflorum ‘Variegatum’, which has a lovely creamy edge to its leaf, to the other variegated form ‘Striatum’. Another one I like is P. verticillatum, which is 5-6ft tall, has lovely needle-like leaves and good autumn colour.

“What is not so talked about is how good their autumn colour can be. P. × hybridum turns a lovely buttery yellow colour. People tend to tidy them up before it shows, but you can let them go out in a blaze of glory.

“Obviously the main threat is the Solomon’s seal sawfly, which we didn’t have 10-15 years ago but is now established, like the lily beetle. You need to spray as soon as caterpillars appear or you’ll have nothing left of the leaves by the end of the weekend.

“Plant them in shade, where they can cope with dry soils, but not those that get too wet. They are strong, robust plants and low ground cover plants such as ajuga, tiarella and even hardy geraniums can be grown beneath as the thin Polygonatum stems, being leafless near the base, allow enough light through for the others to grow well.”

David Anderson, manager, Seven Hills Garden Centre, Surrey
“At my centre I have great delight when we receive the first inputs of this delightful spring-flowering plant, which is still a cottage garden favourite. We stock P. biflorum and
P. multiflorum, and sell them in our shady plants section.

“I always dedicate an area to promoting this plant. Choosing a shady corner, I tier up the back and use specimen tree ferns for back height. Then I mix the Polygonatum with dicentra — a great combination. I fill in any gaps and underplant with ferns. This creates an eye-catching display and should easily boost customer interest and sales.”

Species and varieties
P. biflorum is probably the largest of the similar-looking species (lush green paired leaves and creamy dangling flowers), which is why its common name is “great Solomon’s seal” and it is sometimes referred to as P. giganteum. It is a native of eastern and central North America, where it has been used traditionally by Native Americans as a medicinal plant and food source. Height: 90cm.

P. cirrhifolium is a striking, tall Chinese variety with rigid stems around which are arranged whorls of thin leaves. Delicate white or pink flowers with purple markings are produced at the end of long, pendulous stalks in the summer and hang under the leaves in a circle around the stem. Height: 1m.

P. curvistylum is a tall Chinese variety with deep-green slender stems that hold whorls of narrow lanceolate leaves. It also produces clusters of little mauve bell-like flowers from the leaf axils of the upper leaf whorls in June. The upper parts of the growths act as tendrils. Not invasive. Height: 50-60cm.

P. graminifolium is a diminutive alpine species that produces clumps of narrow, grass-like leaves and small, pink, scented flowers. Then pinky-red berries are produced in the autumn. Height: 10-15cm.

P. hookeri is a tiny species with green leaves and deep-pink flowers in the summer. Height: 3cm.

P. × hybridum AGM (H7) is the most commonly grown Solomon’s seal. It is a graceful plant, producing arching stems with precisely paired dark-green ovate leaves. In May they bear white and green-flushed bells on the lower side of the leafy shoots and later black berries. Height: 1m.

P. × hybridum ‘Betberg’ is unusual for having a chocolate brown/dusky purple colouring on its emerging stems and young leaves. As the leaves mature, they become dark green. Clusters of cream flowers hang from the leaf axils in April to May and purple berries are produced later. Height: 60-75cm.

P. verticillatum is a tall species with slender, erect stems that are clothed at intervals with whorls of very narrow pointed leaves. In spring, clusters of small creamy/pale-green flowers hang along the upper ends and are followed by small red berries. Takes on warm yellowy tones in the autumn. Height: 90cm.